Critical This Hint requires immediate attention, as the issue may have a serious impact upon crawling, indexing or ranking. Issue This Hint represents an error or problem that needs to be fixed.

Meta robots found outside of <head>

This means that the URL in question has meta robots specified in the HTML, but outside of the <head>.

Meta robots tags are supposed to only be contained in the <head>, but even if they are found in the <body> they will be respected by search engines, despite what you might expect. 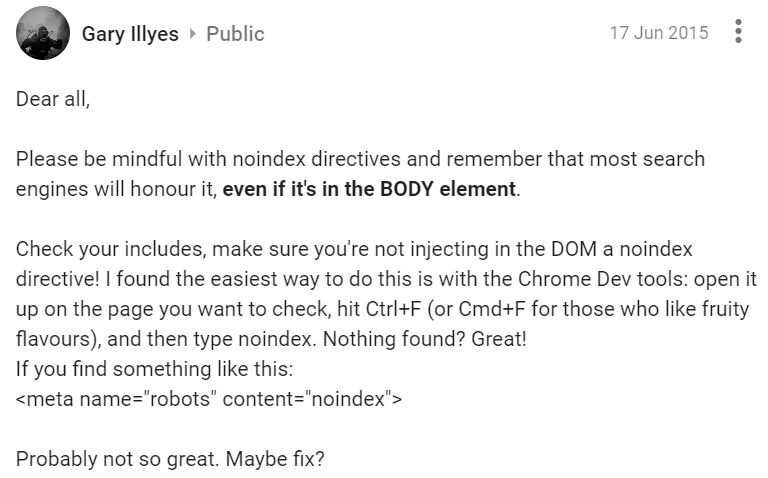 The example above from Google's Gary Illyes is probably the worst case scenario - when the robots value is for noindex, as you may not realise that the tag is being rendered.

This Hint will trigger for any internal URL which contains a meta robots tag in the HTML, yet outside of the <head> area.

Examples that trigger this Hint:

The Hint would trigger for this URL if it had a meta robots tag that was anywhere outside of the <head>, for example:

The Hint MAY also trigger if you have invalid HTML elements which break the <head>, as this can mean that the <body> starts early, and the robots tag ends up in there.

This Hint is marked 'Critical' as it represents a fundamentally breaking issue, which may have a serious adverse impact upon organic search traffic. It is strongly recommended that Critical issues are dealt with as a matter of high priority.

Typically, this comes from an instance where the <head> gets broken. When Googlebot parses your HTML, the robots tag is moved to the body. Check to see if either of these Hints are also triggered:

If this is the case, then resolving these issues first may also resolve the meta robots problem.

If either of these 2 Hints is not triggered, however, you'll need to do some more digging to investigate the issue. It would then indicate a configuration issue on the URL in question, which is likely due to an issue with a page template or script which is putting the robots tag in the wrong place.

Check both 'View Source' and the rendered DOM (via Chrome DevTools 'Inspect') which will help determine how the rogue tag is being loaded in. You can also try crawling using Sitebulb with the HTML Crawler and the Chrome Crawler (to see if you get different results).

The robots tag will need to be removed from the <body> (and replaced in the <head>), so you may require developer assistance.